I opened the package of records, and knew it would be an easy assignment—only 39 pages. My task? Screen the records to confirm there was a case and if so, get a qualified RN testifying expert. I knew a little about the incident; it was a bad outcome – death – following a visit to a hospital emergency department for a headache. I figured this case would be about a doctor not following the standard of care (and probably not following facility protocols) in failing to rule out or diagnose a subarachnoid hemorrhage (SAH; aka a brain bleed).

Mrs. S, a fifty-one year old woman, presented to the emergency department approximately forty-five minutes after onset of a headache. The nurse triaged Mrs. S and noted an abnormally high blood pressure, “history of headaches, however not this severe, denies nausea, vomiting, photosensitivity, has history of hypertension”. I read through the 39 pages of records a couple of times, looking for deviations in the standard of care. I found a few, just like I expected

The doctor’s notes read contradictory to the nursing notes about the nature of the headache. A nurse had bothered to chart that the doctor had seen Mrs. S in the waiting room and then “Per MD, ordered CT head, medication and ‘no need to have patient change into gown.’” The comment about not gowning showed the doctor’s intent to (as we say in the ER) “treat and street” versus a full work up and the possibility of admission to the hospital.

I continued reading, hunting for explanations for the bad outcome and found the CT was normal, yet the doctor didn’t follow with a lumbar puncture (LP). Without doing an LP, he could neither be sure that Mrs. S wasn’t experiencing a sentinel bleed (the precursor to a full blown brain bleed), nor rule out meningitis as a differential diagnosis. Not performing an LP is a deviation and should be accompanied by an explanation noted in the chart.

You should know that in my years in the ER, I’ve taken care of a lot of patients that come in with the same complaint as Mrs. S. I carried out orders on patients with headaches who then went home, I sent patients out to the OR when they needed brain surgery, and sometimes it was already too late and I worked to make them comfortable as they died. But the work up for Mrs. S was halted prematurely, which tipped my internal thermostat to blood boiling range. I can accept errors, but I don’t do well when the chart indicates indifference.

I decided to put together a timeline as a freebie for the attorney, just for fun. After all, no one needs a chronology for 39 pages—that’s a speed read—but thought maybe he’d see how thorough I am and send me a bigger case in the future.

In such a short record, little details are usually obvious, but as I plugged in the actual times in chronological order, one detail popped out that didn’t stand out in my read-throughs: The ER physician’s fateful order to DISCHARGE Mrs. S was written and entered BEFORE he charted his re-evaluation! The offending entries are captured below: 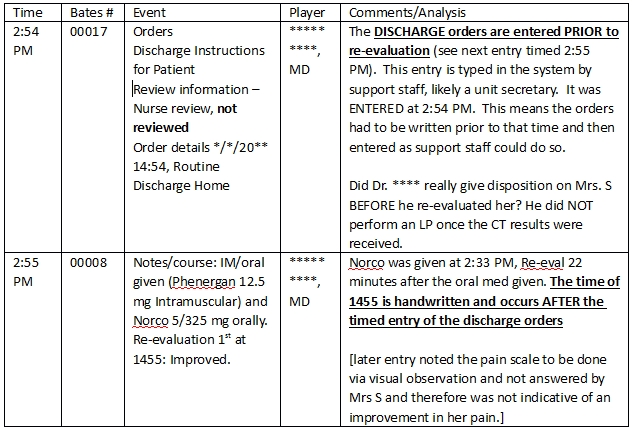 Mrs S’s chart is a hybrid of electronic and hand written. The discharge orders were entered electronically so the time noted reflects the actual time they were entered, but the clinical notes were hand written, including the time of re-evaluation, and therefore should reflect the time the doctor or nurse actually performed the action noted. The difference in the above chart is only a minute, but it’s crucial. It objectively captures what had triggered my gut instinct: the doctor rushed Mrs. S out of the ER. Even if Dr. **** had bothered to explain the reason for not doing an LP, it would be hard to defend when he discharged his patient prior to (or more likely without) re-evaluation.

I was wrong—not about the case, but about how to approach it. No set of records, no case, is too small or too straightforward for a chronology, just like Mrs. S’s headache wasn’t too small for a thorough work up. Don’t rush your analysis. Put those cases in a gown and give ’em a real exam. They have a real story to tell.